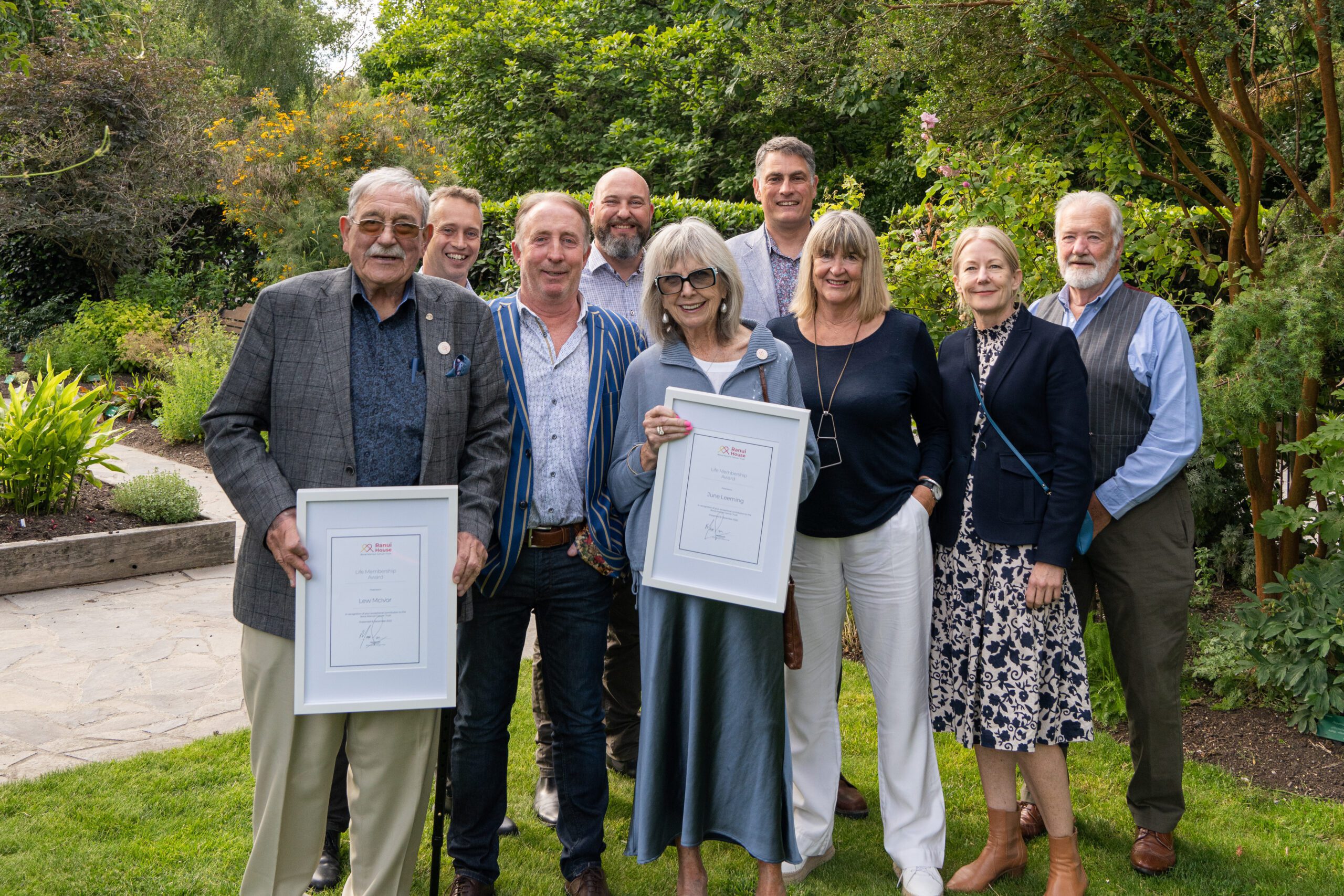 Two Christchurch volunteers have been gifted a new title to recognise a lifetime of dedicated service, which has seen thousands of Kiwis provided a home-away-from-home when needing life-saving medical treatment.

June Leeming and Lew McIvor have been awarded Honorary Life Memberships by the Bone Marrow Cancer Trust – the first recipients of such an honour.

The Trust raises funds for life-saving cancer research and owns and operates Ranui House, a 26-apartment complex that provides a home-away-from-home for patients and families undergoing treatment at Christchurch hospitals. The awarding of the Honorary Life Memberships at a function on Thursday 8 December came as a surprise to both Lew and June.

“I thought we were just going to the Christmas function. To then be called up to receive this special honour just blew me away,” says Lew.

Lew and June were both instrumental in the establishment of the Bone Marrow Cancer Trust in 1990. The Trust was initially set up to raise $1 million for a Bone Marrow Cancer Unit at Christchurch Hospital, but Lew, June and the other trustees had a broader vision.  “We always knew the Bone Marrow Transplant Unit wasn’t the end of our journey as we realised patients would need somewhere to stay during their treatment, which can last for months. We had to provide accommodation and we wanted it to feel like a real home away from home. So, we just kept fundraising,” says June.

That fundraising financed the 26-apartments the Trust has today, known as Ranui House, and the construction currently underway of a new apartment complex in Selwyn Street, which will double the Trust’s accommodation capacity.

Bone Marrow Cancer Trust Chairman Max Bremner says Lew and June’s incredible contribution has shaped the Trust into the successful community asset it is today.  “For more than 30 years Lew and June have given an unwavering commitment to the Bone Marrow Cancer Trust. They both have a pioneering, tenacious spirit and a heartfelt passion to support those experiencing cancer or other health conditions who need the care we can provide. The awarding of this Honorary Life Membership recognises their leadership, wisdom and dedication along with our immense grattitude for all they have done,” says Max.

Lew McIvor has been a Trustee on the Bone Marrow Cancer Trust since its inception in 1990 and over that time served five years as chairman. He has been instrumental in negotiating the commercial arrangements which enabled the development of Ranui House and the new Ranui Apartments.  “With the changing nature of our health system Christchurch is going to become an even larger hub for treatment, with more and more people being treated as day patients. The type of specialist accommodation the Trust provides is going to become an essential part of our health system.”

June Leeming has also been part of the Trust since the beginning after being introduced to the cause by her late husband Noel. June was a Trustee until 1999, when she became the Trust’s Patron. Over more than 30 years she has organised many significant fundraisers for the Trust including, in the early days, hosting dinners and auctions in her own home.  “From day one I knew the Trust had incredible potential and it’s been a privilege seeing it go from strength to strength. Every time I thought about retiring I simply couldn’t do it as I realised I would miss the Trust too much. Being part of the Bone Marrow Cancer Trust has just been the most amazing experience,” says June.